This post is a message (and a message within a message, but ignore that for now).

But, the overt message is this: this is not a cuddly creature. 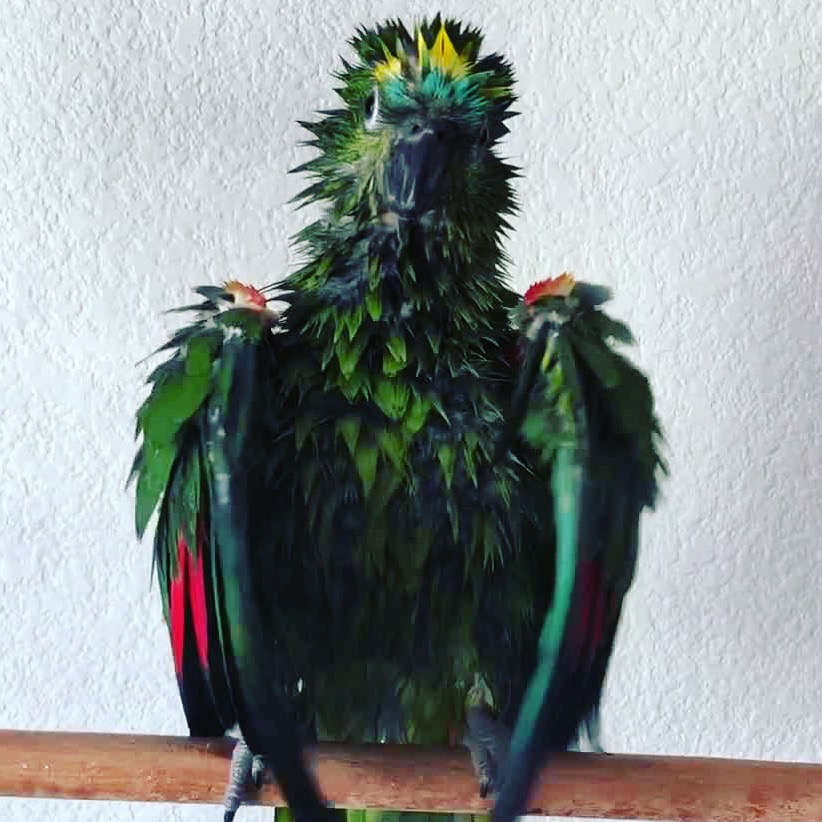 Cats domesticated us, so they tend to be less demanding, and dogs had the fortune or foresight of evolving beside our progenitors, so they are uniquely tuned to us (and vice versa – there is even some conjecture that dogs domesticated us instead of the other way around).

So, anyone that is used to cats or dogs thinks, “Well, could a parrot be that much different?”

Imagine something with the intelligence and emotional maturity of a toddler – now give that creature wings and a bolt cutter on its face. That would be a parrot.

But perhaps you need an alarm that always goes off at sunrise, even on weekends. One with no snooze but loud enough to be heard by passing airplanes. (My particular parrot loves to wake me up by saying, “Hello? Hello?” and singing Star Wars tunes). In this case, a parrot would be perfect for you. If you are older than 18, though, you might give a thought to specifying in your will who will take the bird – many parrots live 50+ years.

Also, many parrots are pretty jealous, which also leads to conversations like this:

(Date comes over to your place, sees parrot)

Them: Oh! A parrot! How cool!
You: Yes, don’t get close…
Them: Ouch! It bit me! Do you have bandages? Sorry for bleeding on your floor.

So, I’m not trying to dissuade anyone, necessarily, but do think that it is easy to underestimate the difficulties involved in having a parrot. If you really are bound and determined to get a parrot, there are a lot of different sources for finding parrots that need to get rehomed – see /r/parrots or this, but there are others, as well.

Brief aside – it is interesting how much surnames are stable compared to first names. This makes sense, since they are patriarchally passed along, as opposed to first names, which are created by whim and happenstance and the parents’ creativity. This chart from ancestry.com by state is striking; when you consider that Smiths make up about 1% of US population it’s understandable but still pretty surprising.

First names have substantially more variation but also has distinctive popularity waves, and you can guess a person’s age from their first name. So: given a first and last name, you can derive a potential age and narrow down their location substantially.

I work with an Alexei and it turns out that he goes by Alex, Alexie, Lesha, and a host of other names, but the winner of alternate forms has to be female name Anays, which also has variants of Anaís, Anais, Annais, Anaïse, Anaise, Anaiss, Anayss, Naïs, and Ani! In English names, the one I always found confusing was the shortened form of “Richard” is “Dick.”