Setting up an Alix

Updated 2010-02-04: You know, in reading this over, I think this came out as a little harsh on the Alix. I stuck that tiny Alix board in an old box, put it under my TV, and it’s been running for two years with absolutely no problems. Over time, it’s gotten more and more stuff put onto it – file serving, torrent serving, iTunes, cron jobs that backup/index my mail, so on and so forth, and all along it has chugged along without complaining, without noise, and only sipping 5w of power. If I were buying now, I’d definitely take a look at SheevaPlug, and at the high end it’s always been tempting to build a home server with an Artigo A2000 as the base, but given that I’ve replaced my router TWICE in the past two years due to flakiness I just have to give kudos to a device that works without problems.

I’ve been looking for a replacement for my unslung NSLU2 for a while. I have tons of USB drives all over the place, and wanted to a) consolidate them in one place, and b) have a low power, fanless, tiny machine that could do mail fetches, bittorrent downloads, mt-daapd, e-mail indexing, and other background tasks. The NSLU2 wasn’t bad at all – it was very close to ideal – but it was just a tad underpowered for what I wanted, both in memory and processor.

I eventually settled on an Alix.3D3 board for \$132, and ordered it from mini-box.com (which turned around the order really fast, so kudos to them, and I had also heard good things about them when doing my research). It’s tiny, just a little smaller than your typical XBOX game (I keep mine in an old cigar box). 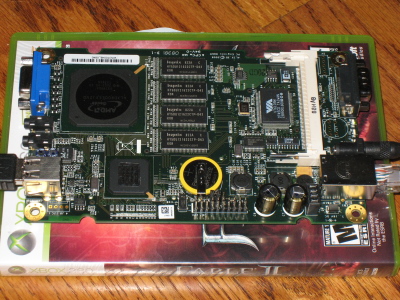 This particular version has a standard BIOS and VGA adapter, so it’s easier to debug; some versions only have serial adapters. (I’m sure I have bunches of serial cables, but at the moment I have no computers that have serial adapters!) It runs very quiet and cool.

So, in typical fashion, I allocated about two hours for everything: 30 minutes to install FreeNAS, 30 minutes to set up the drives, and an hour to gloat. Instead, this turned into a whole day thing. (It was not made easier by VirtualBox kind of breaking USB support in their latest release, but my curses are reserved for Parallels, who in the entire history of their program have never been able to get the USB working halfway decently).

On an Alix.3D3 board, here is the stuff that didn’t work, at least during my hurried first pass:

Here is the stuff that did work:

Final performance? 2.67G of 5 large files in 314 seconds, which is okayish performance for a NAS, and at least 2x faster than my NSLU2. I have it running mt-daapd, rsync, and Samba, and will set it up with AFP soon.

So, if you’re looking for this, then it’s not a bad little board. But, on consideration, I think I’m so much a niche market that it’s not even funny. You can spend less money; the old VIA and new Atom boards have more power and have SATA connectors, which gives you the option of making a little NAS box with cheap hard drives instead of USB drives. You can spend about the same amount of money and get a NAS with pretty much the same functionality; for example, the new Buffalo 1TB NAS drives have media streaming and run about $170 with a terabyte of disk storage.

Bottom line: I’m happy with it, but not only is it not for everyone, it’s hardly for anyone.

Is there anything to be tweaked in the kernel if I want to install this on a Alix 2d3, which have no VGA ?
Reply

I made a post in my blog to help users trying to install ubuntu in an alix board without VGA. http://www.wsartori.com/blog/2010/05/03/how-install-ubuntu-lucid-lynx-alix-board/
Reply
Add a comment
<< Creating Mail Digests with Python and IMAP Mysteriously Hanging Ubuntu >>