An update from my previous review on Exposé (or Expose) for Windows: two new programs. But first…

I mentioned in the review for WinPlosion that it had a number of bugs, and that I would try to reach technical support in order to get them fixed. I made two attempts to reach them and never got a response. Furthermore, I’ve never received any e-mails from them about any updates to the program — but any way, it looks like I would have to purchase the program again to get the latest version, and (still!) there isn’t a trial version available. So, given the number of bugs in WinPlosion and the lack of support, I’d have to say that it is not recommended.

User Interface. Installation for the trial version was no problem, and took up only about 250K on disk. Runtime memory requirements were equally sparse at about 3-5M. The following configurations options are available: 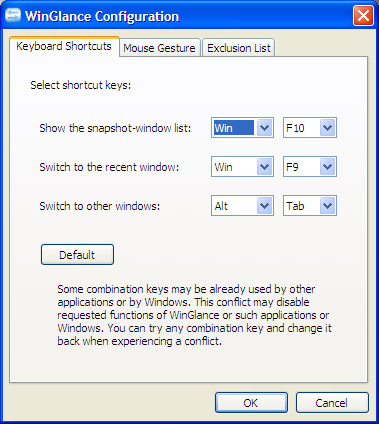 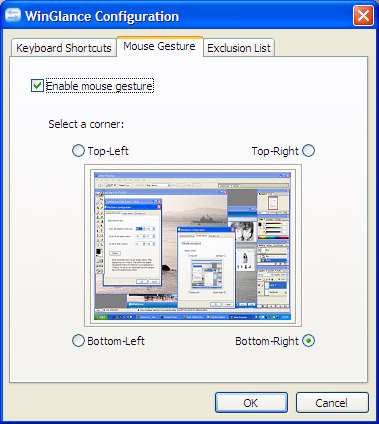 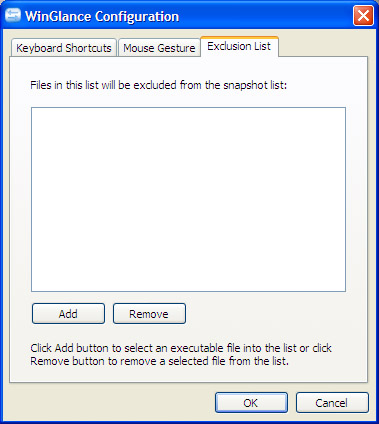 The only mode available in WinGlance is the “show all programs” mode. When you go to the overview, it tiles the windows in a matrix; since the screens are snapshot at the time that you go to the overview, there is a delay of a couple seconds or more, depending on how many windows you have open. The matrix is straightforward, there is no Expose-level cool swooping and intelligent swooping of Windows. Mac users, they get all the cool toys.

The default settings aren’t good for my pattern of usage. The thing is that in Windows the Alt-Tab key is used for two very different user operations:

The WinGlance default settings mean that user task #1, above, suddenly goes from a subliminal thing to a waiting-for-three-seconds thing, which in my humble opinion is too jarring. Given the limited utility or duplication of existing functionality of the other two keys — “Switch To Recent Window” just switches between the two most recent windows, and “Switch to Other Windows” just cycles through the window list, but without an icon overview and without the option of using the shift key to go backwards — I would just recommend assigning all but the first key to something that you’ll never hit, leaving Alt-Tab with its original functionality.

Hovering over a window brings up two small buttons that allow you to see some task information for the process, or a close box to close it. The close box (oddly, and irritatingly) prompts for a window close, but at least it is nice to be able to close the window from the browser view.

Compatibility. Handled Trillian, did not handle Stickies, did not work with multiple desktops. Handled floating palettes.

Bugs. A few minor ones. If you select a program that currently has a modal dialog up, focus is given to the main window instead of the modal. Also, if you have the options dialog for WinGlance up, it does not minimize when you go to overview mode, ironically enough. Binding Anything-ESC to the overview mode would just bring up the overview mode and then dismiss it, not a big deal. Had one crash but was never able to reproduce it.

User Interface. As simple as you can get. Hitting Alt-Tab brings up a list of the windows, and a snapshot for the currently highlighted window is shown. It feels like looking through a blindfold.

Compatibility. Trillian and Stickies were not shown in the Alt-Tab list (although they usually don’t, either). Palletes are handled correctly, as were multiple desktops.

Bugs. One really annoying one: oftentimes, the snapshots aren’t done for windows, leaving only a title bar (see this screenshot for an example). It happened frequently enough that it almost wasn’t worth having the utility at all. Also, modal windows show up in the window list as separate windows (they don’t usually show up in Alt-Tab).

Microsoft PowerToys isn’t worth it. WinGlance is close, even without all the modes, but not supporting multiple desktops is a killer for me. If you don’t use them, it’s worth a try. From the last review, I’ve given up on WinPlosion, given the lack of support. Windows Exposer and iEx do not appear to have had any updates. Still looking…

Add a comment
<< Passion Of The Christ Implications Of Fitt's Law >>