I’ve decided to get much more into writing, so I finally went down to the local library, took the test (you can only miss five or less, I know some people that have taken it two or three times), and got my artistic license. It’s only the basic literary license; I’m allowed to merge story characters together, add characters to move the plot along, elide speeches and conversations, and play a little loose with facts in the interests of good pacing. I have to have this for at least three years before I can get the class B license, which allows you to make up anything and everything (it’s for political speech writers and tabloid editors, as far as I can tell). 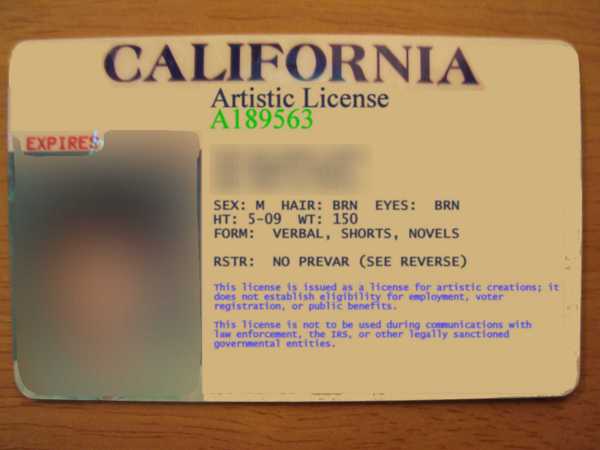 The lady that graded the test was this off-putting schoolteacher type with horn-rimmed glasses, but she was actually pretty nice. She gave me the right answers to the questions that I missed, although there was one that I disagreed with:

You are writing a story set in “a day in the life” of an artist that lived in the 1930s (the story is in first person). While never married, he had a platonic relationship for many years with a woman that was 14 years younger. You are unable to find any evidence that there was any physical relationship, but there are a series of letters that indicate a deep and abiding affection between the two. Do you: